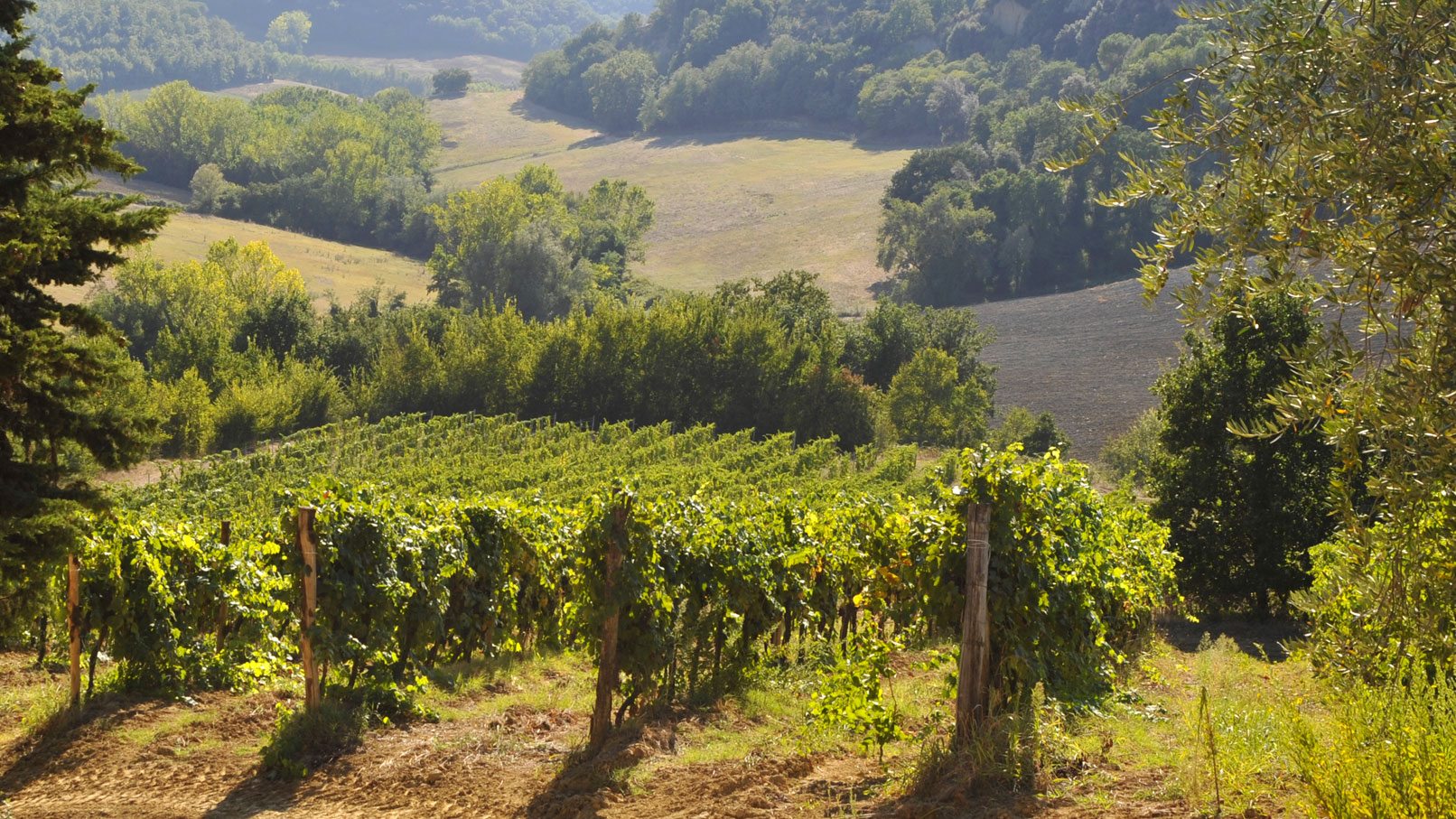 The territory, the terroir, and the vineyards

Fattoria Valacchi is located in the heart of the Chianti region, in an area called Val D’Elsa (so named for the presence of the Elsa River), halfway between Florence and Siena.
The nearby town of Barberino Val d’Elsa is just 30 km/18.5 miles from Florence and 28 km/17 miles from Siena.
The history of the Val d’Elsa has its roots in the Etruscan era, as evidenced by many finds such as pottery, tools, and necropolis scattered throughout the territory.
The importance of this area is to be traced back to the Middle Ages (9th – XIII century AD), as it was crossed by the Via Francigena, an important route that connected northern France to Rome, a strategic commercial, economic, and military crossroads. The presence of the important imperial city of Semifonte further attracted trade and incoming population.
The Chianti area was already famous at that time for its history, culture, and its products, including Chianti wine, whose first production regulations were set in 1874.

The terroir of Fattoria Valacchi is typical of this area of Chianti: Pliocene origin and sedimentary formation. The soil is initially sandy (up to 0.50 m/19.5 inches deep) and then tends toward clay and silt, of medium texture, rich in fossils of sedimentary origin.
The vineyards have an altitude of about 300 meters/984 feet above sea level and are exposed partly to south-west and partly to north-south (last plantings) to benefit from maximum sunlight.

The largest portion of cultivation is represented by Sangiovese grapes, the foundation of the great red wines of Chianti and Tuscany. Other cultivations include international grape varieties such as Cabernet Sauvignon, Merlot, and Syrah.
Since 2019, a vineyard renewal project has been underway based on the research and re-planting of native vines such as Canaiolo, Colorino, Cigliegiolo, and Malvasia Nera to create wines more characterized in their typicality.
To this end, the historic white grape varieties of Chianti, such as Trebbiano, Malvasia Bianca, and Canaiolo Bianco, have also been re-introduced in small parcels of the vineyards.

Vine density varies between 4500 and 5000 plants per hectare and the yield per hectare is limited to a maximum of 60-70 quintals per hectare to reduce the quantity while enhancing the quality of the grapes.
The vines are trained in espalier with guyot or spurred cordon pruning.
Care of the vineyards is the foundation of a great wine: for this reason, extreme care is dedicated to them. A first, very rigorous pruning (“short” pruning) is carried out in January, while a second pruning is carried out in spring (“green” pruning), together with copper and sulfur-based treatments in the wake of centenary tradition to protect the vines from pests.

The land is worked in alternate rows, leaving it partially untilled and managed with periodic shredding.
Pruning takes place at the height of vegetative development to make the most of solar radiation.

A thinning of the bunches is carried out in July and August to ensure the maintenance of the vegetative-productive balance of the plant.